The four sample LPs examined here fall into two categories.  Two were aimed at the record buying customer and offered a sample in one case of the initial Pacific Jazz line highlighting the major artists who emerged on the label, and the other sampled the new releases that had been recorded in stereophonic sound. 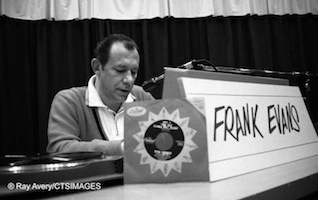 The narrative copy was written by Woody Woodward who had joined the company in 1955 and would become a “jack of all trades” for the label, assisting at recording sessions, conceiving promotional campaigns, taking recording session photographs, writing liner notes for albums and assuming the full duties of art director in designing album covers.

William Claxton was still associated with the label, but his activities as fashion photographer, motion picture set photographer and shooting for other record labels took him away from day to day involvement with Pacific Jazz.

SOMETHING FOR BOTH EARS, HFS-2, offered customers a sampling of the recent releases in the STEREO 1000 line of releases.  The clever cover and title concept featured Peggy Moffitt with two antique ear horns, something for both ears. Miss Moffitt would soon become Mrs. Claxton.

When Woody was in the initial stages of planning HFS-1 he asked his old friend Bill Emery what the album should sell for.  Woody and Bill had met when they both worked for Ray Avery at “Record Roundup” on South La Cienega.  Bill had been in record retailing for ten years and Woody trusted Bill’s knowledge of the retail end of the record business. Bill told Woody that a “buck ninety eight” would probably be the right price for such a sampler. Stereo albums sold for slightly higher prices at the time and HFS-2 was priced a $2.98. 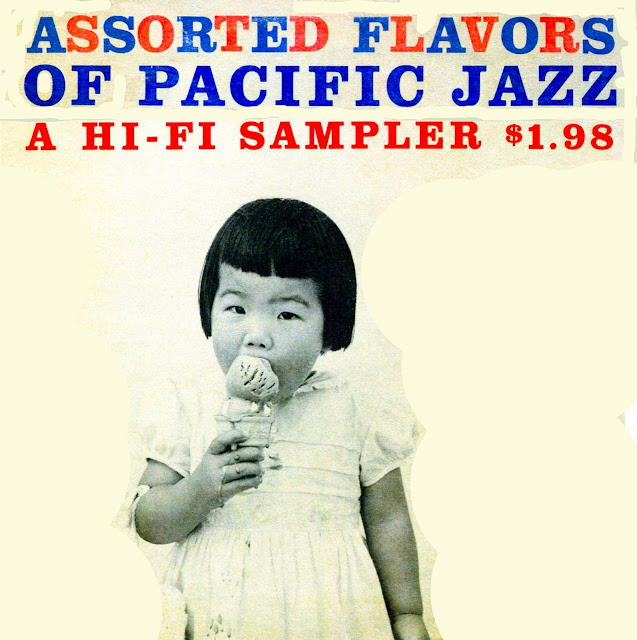 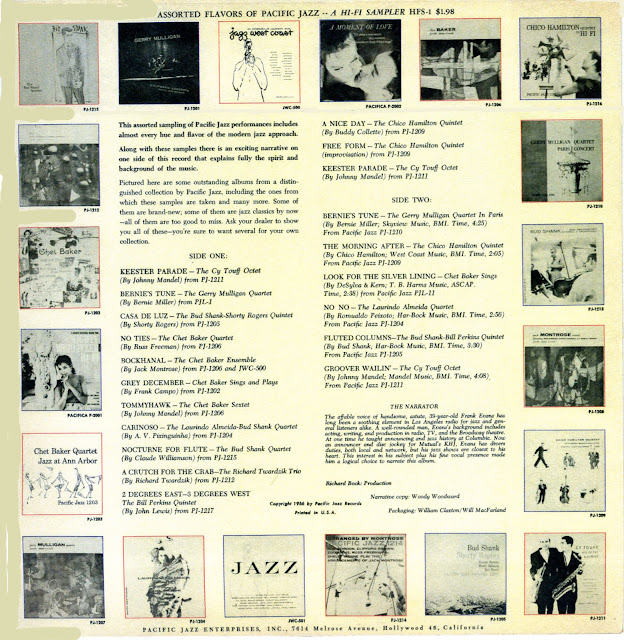 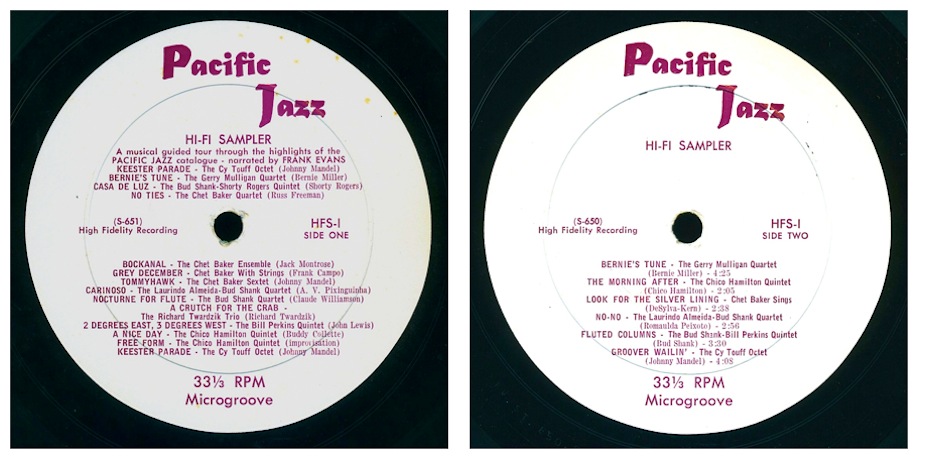 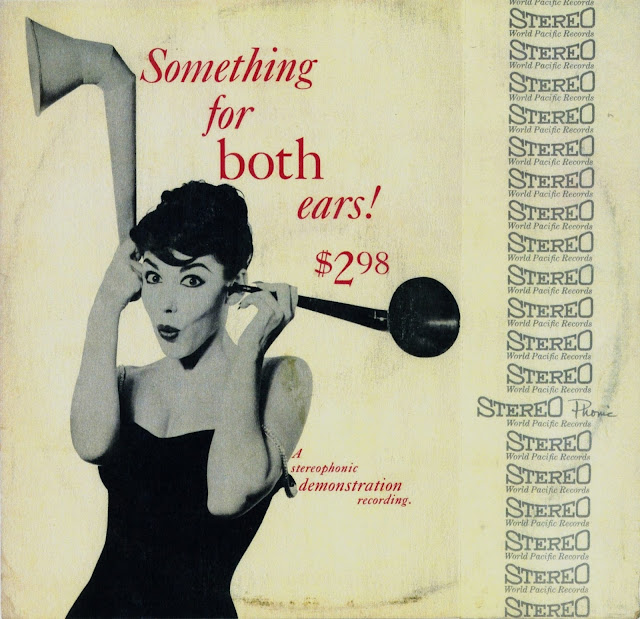 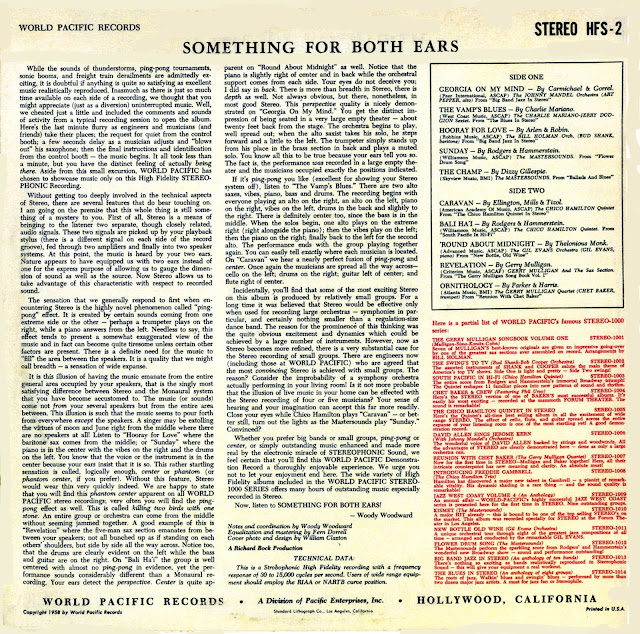 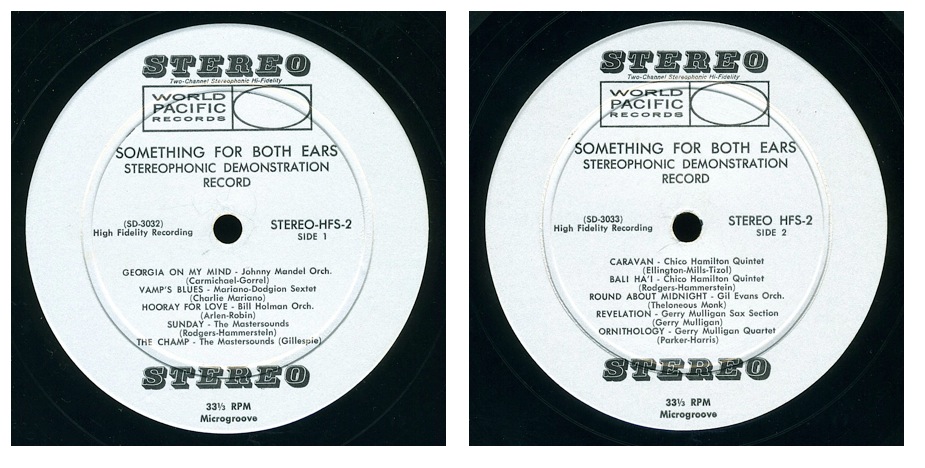 The other two sampler LPs were “not for sale” and were specifically designed for free distribution to disk jockeys for air play to promote Pacific Jazz releases.  The tracks on each LP had been edited to reduce the playing time to well under three minutes.  In the competitive jazz radio market, tracks with a short airtime were favored by station heads who could instruct their dee jays to play short tunes, plug the sponsor, play another short track and get another sponsor plug in. 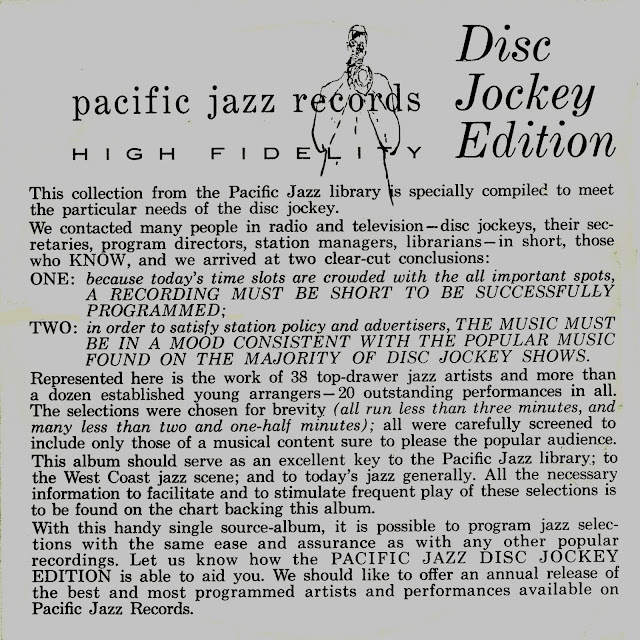 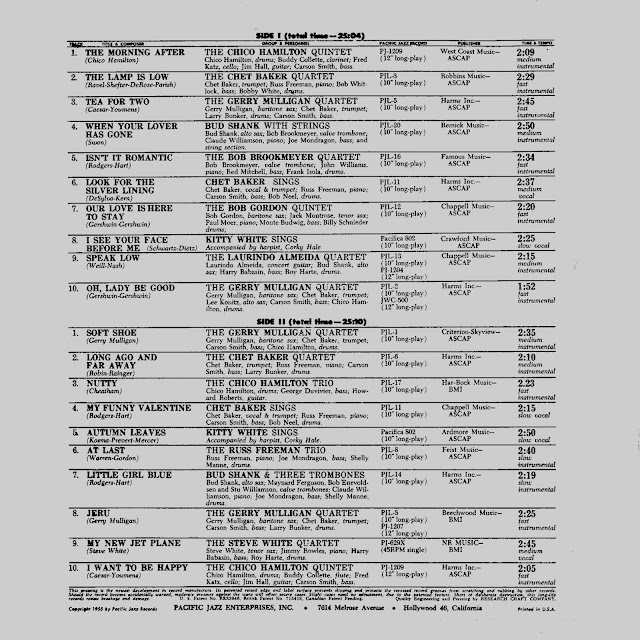 DJ-1 featured a selection of tracks from current Pacific Jazz releases, most from LPs currently available from record retailers.  The Steve White selection from 45-629 is an oddity on the album.  White was a well known reed man in Hollywood in the early 1950s.  He might have been bipolar, undiagnosed at the time, but legend has it that he could “cut” the best reed players in Hollywood at a jam session, those falling to his prey included Zoot Sims, Gerry Mulligan and others.  But White could break from his dazzling tenor solo into song, and therein lies his end to bookings at upscale jazz venues who had not booked a vocalist.  Roy Harte and Harry Babasin had scheduled a Steve White 10” LP into their Nocturne release schedule before the label folded.  It also appeared as a possible 10” LP release on a Pacific Jazz catalogue page from 1955, and was announced with track information in the Spring 1955 edition of Jazz News:

But the 10” LP concept was abandoned by Bock, and the Nocturne mastered sessions would remain unissued. 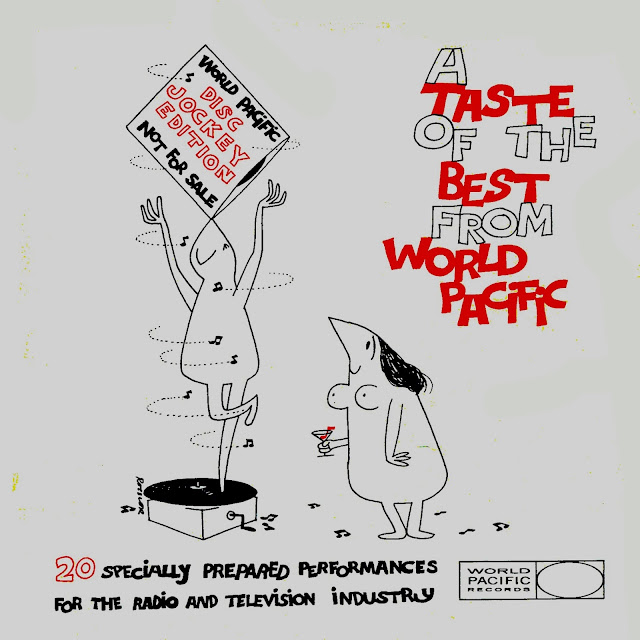 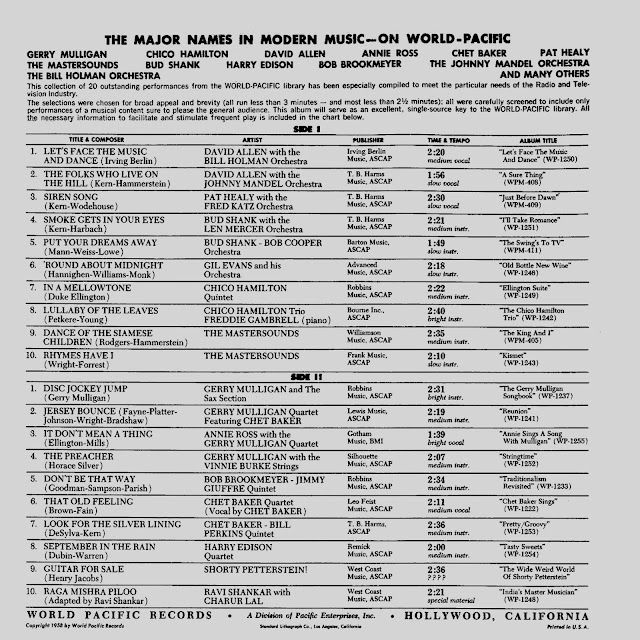 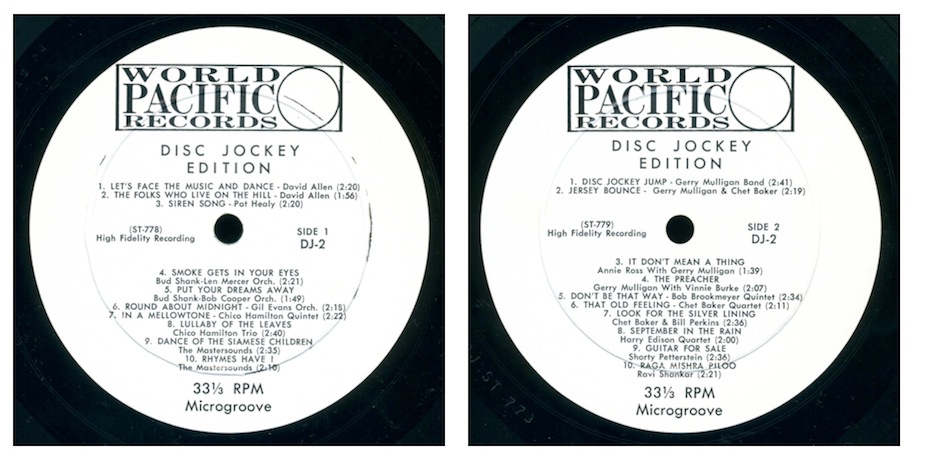 DJ-2 similarly offered edited tracks that were well under three minutes to appeal to jazz dee jays needing short jazz tracks for programming.  The source detail for DJ-2 offers a glimpse of scheduling that can get out of sync when releases in line for release run into problems.

On side one the seventh track listed, IN A MELLOTONE, was to be released as WP-1249, ELLINGTON SUITE, with the Chico Hamilton Quintet featuring Eric Dolphy on reeds.  Bock rejected the entire album that had reached the test pressing stage and had the entire session redone with Buddy Collette and Paul Horn on reeds.  Years later the test pressing would be found in the UK by a collector who contacted EMI to arrange to have the Dolphy sessions issued on CD.  The ELLINGTON SUITE with Collette and Horn would be released on LP as WP-1258.

On side two the third track listed, IT DON’T MEAN A THING, was to be released as WP-1255, ANNIE SINGS A SONG WITH MULLIGAN, but Bock rejected the first two test pressings thus delaying this release that would finally be placed into production as WP-1253, ANNIE ROSS SINGS A SONG WITH MULLIGAN. Release number WP-1255 would be assigned to a spoken commentary album, REFLECTIONS with Gerald Heard.

The fourth track on side two, THE PREACHER, was to be released as STRINGTIME featuring Gerry Mulligan with the Vinnie Burke string jazz quartet.  The album had been fully mastered with cover art ready to go but Mulligan requested that the release be shelved where it remained until 2006 when Mosaic Records released it as part of the MOSAIC SELECT – GERRY MULLIGAN set. 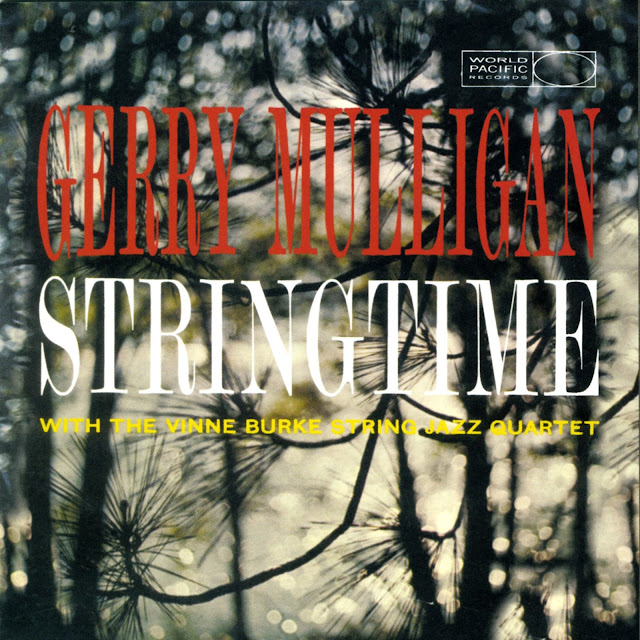 The seventh track on side two that was scheduled to be released as WP-1253, PRETTY/GROOVY, with Chet Baker and dubbed tracks featuring Bill Perkins and Jimmy Giuffre was bumped up in the release schedule as WP-1249.

The eighth track on side two of DJ-2, SEPTEMBER IN THE RAIN, with the Harry “Sweets” Edison quartet recorded live at The Haig was to be released as WP-1254, TASTY SWEETS.  The reissue of these live Haig tracks that had been issued on 10” LP originally would be delayed until the 1960s when Bock reintroduced the PJ prefix and the album was reissued as PJ-11, THE INVENTIVE MR. EDISON.

World Pacific would release other sample albums for retail as well as salesman sample albums.  These will be examined in later posts. 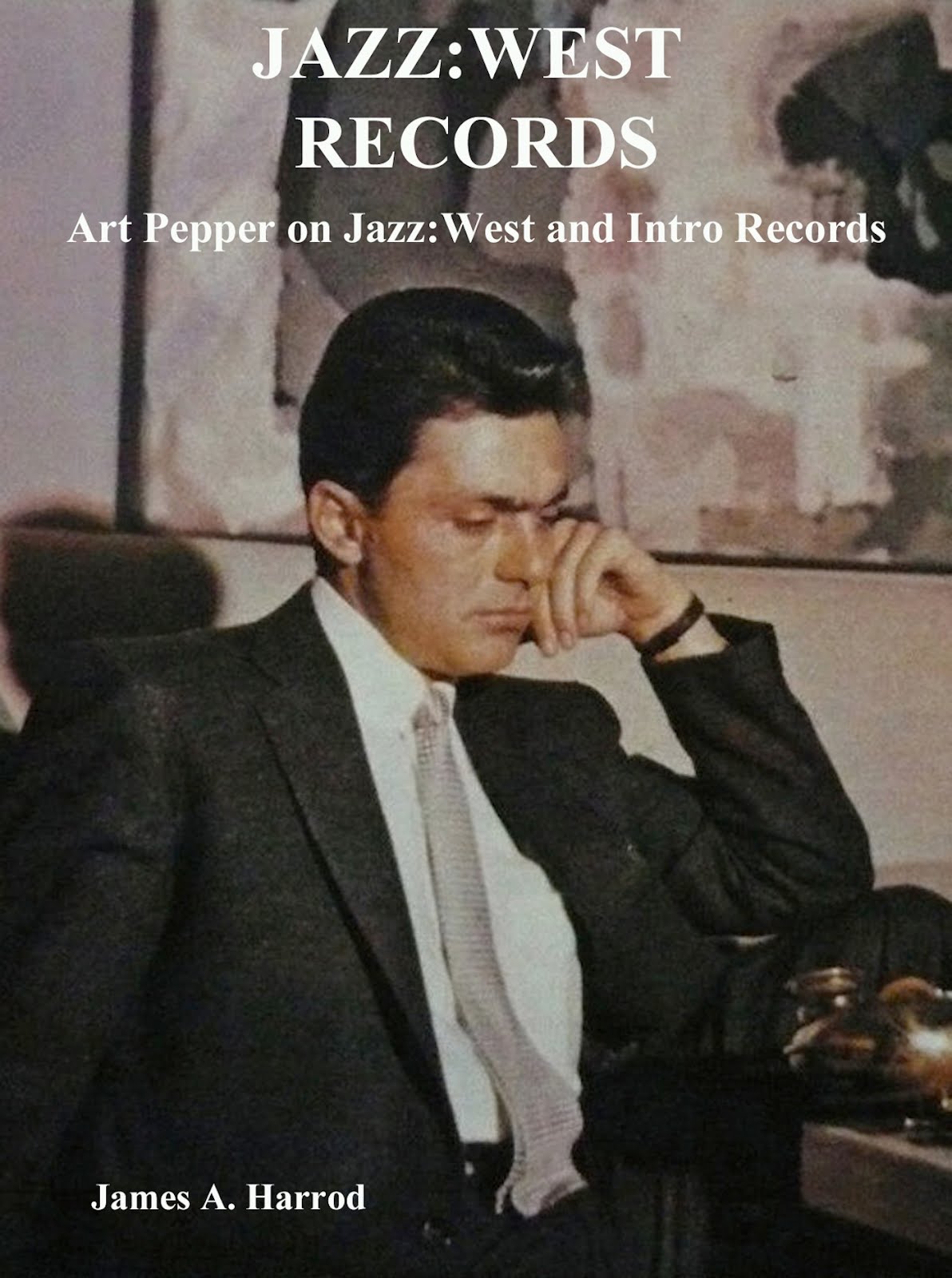